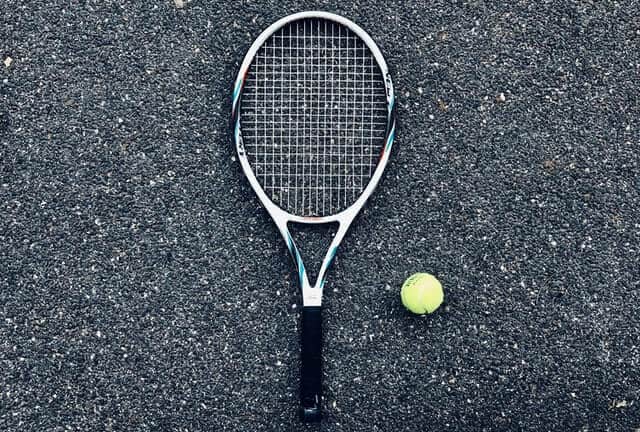 How long does a tennis racket last? This is a question that many people have, and it’s a valid one. After all, you don’t want to spend a lot of money on a tennis racket only to have it wear out after a few months.

In this article, we will discuss the average lifespan of a tennis racket and what can make it wear out prematurely. We’ll also give you some tips on how to prolong the life of your tennis racket!

How Long Does a Tennis Racket Last?

The average tennis racquet life expectancy depends on several factors, including the material that was used to manufacture it and how often you play with your racquet. For example, if you’re an avid player who plays every day or two, then expect your racquets will last about one year before needing replacement because they have worn out from use.

If you’re a less frequent player and only play once every few weeks, then expect your racquet to last about two years before needing replacement due to wear-and-tear caused by lack of playing time with it!

Do Tennis Racquets Wear Out?

It is a common misconception that tennis rackets do not wear out. In fact, it’s been proven over time through extensive testing and research that all racquets will eventually break down after prolonged use; this includes both metal-based models as well as graphite frames (which are made from carbon fibers).

The lifespan of your tennis racket depends on how often you play with it, but also what kind of material was used in the manufacturing process. Graphite racquets tend to last longer than metal ones due to higher quality construction. Better construction results in fewer defects being present during manufacturing processes, such as molding or extrusion.

Metal racquets also wear out faster because there are more parts on them that can break over time from repeated impacts with other objects such as balls or the ground itself!

Graphite rackets are usually made from woven carbon fibers bonded together with epoxy resin which makes them much stronger than traditional racquets made out of wood or metal.

Tennis racket strings usually last around 40-60 hours of play, but this will vary depending on how often you play and the type of strings that you use. If you’re using synthetic gut or multifilament strings, then they will typically last longer than if you’re using natural gut strings.

If your strings are starting to lose their tension, then this is a good indication that it’s time for a new racquet!

How Often to Replace Tennis Racquet?

It is not advisable to wait until your tennis racket breaks before replacing it. A good rule of thumb is to replace it when you start feeling a decrease in the power and control that you have when playing with it. This usually happens somewhere between 12-18 months for avid players or around 24-36 months if you only play every few weeks.

If you want to prolong the life of your tennis racket, then it is important that you do not abuse them. This means avoiding hitting hard surfaces such as concrete or asphalt with your racquet and making sure they aren’t exposed to extreme heat or cold temperatures too frequently.

This can cause irreparable damage, which will shorten the lifespan of your racquet. It is also important that you do not wrap the strings too tightly around them when storing them, as this will cause unnecessary wear and tear to occur over time!

What are The Signs that You Need a New Racquet?

The first sign that you may need to replace your current racket is if it starts feeling heavier or less responsive when hitting balls. You might also notice that the strings are no longer as tight as they used to be, and this can affect both power and control.

Another indication could be if there is a significant dent in the frame of your racquet as this will make it much more difficult to hit balls with accuracy. If any of these symptoms start happening, then you should replace your racket sooner rather than later!

Should I Replace the Racket or Just Change Strings?

If you’re wondering whether or not it’s worth changing your strings, then the answer is yes. Changing out old worn-out strings will help prolong the life of your racket by making it easier to hit balls with accuracy and power.

For example: if you’re playing on a hard-court surface like asphalt or concrete, then having new strings can make a big difference in how your racket performs. This is because the old strings will be more prone to absorbing the impact of hitting balls against these surfaces, which can cause them to wear out and break faster.

On the other hand, if you’re playing on a softer surface like clay, then it’s not as necessary to change your strings as often because they won’t be subjected to the same level of wear and tear.

Tips to Prolong the Life of Your Tennis Racquet

Do I Need 2 Tennis Rackets?

It is not necessary to have two tennis rackets, but it can be helpful if you’re looking to prolong the life of your current one. This is because using a backup racket will help reduce the amount of wear and tear that is inflicted on your primary one, which will in turn make it last longer. Many club players and professional players usually have 2-3 different racquets they use throughout the year, depending on the playing surface.

It’s also a good idea to have a backup racket if you’re going to be playing in a tournament and don’t want to risk damaging your only racket. Just make sure that both rackets are the same type (e.g., both made from graphite) so that it doesn’t affect how you play too much when switching between them during matches!

If you’re not sure whether or not you need a backup, then consult with a local tennis pro to get their advice on the matter! They will be able to help assess your playing style and recommend the best course of action for keeping your racket in good condition.

Tennis racquets have a limited lifespan and need to be replaced regularly in order to maintain optimal performance. The average player should replace their racket every 12-18 months, while those who play more often should do so every 24-36 months. However, this can vary depending on a lot of factors.

We hope you found this article helpful! If you have any further questions, please don’t hesitate to leave a comment.

2 thoughts on “How Long Does a Tennis Racket Last?”

“Tennis Monitor is a participant in the Amazon Services LLC Associates Program, an affiliate advertising program designed to provide a means for sites to earn advertising fees by advertising and linking to amazon.com.”